Today, a coalition of inland waterway transport (IWT) and ports has handed over a declaration with its vision towards 2030 to Wim van de Camp, member of the European Parliament and Violeta Bulc, EU Commissioner for Transport. The handing over of the declaration took place during a high-level IWT and Ports event, hosted by the Port Autonome de Strasbourg.

The joint declaration of the coalition explains the common vision of the inland waterway transport and ports sector towards 2030. Its representatives are convinced that green, smart and congestion-free transport and logistics serving a circular and bio-based economy, will only be a reality tomorrow if they can build on a solid policy strategy supported by sufficient and effective implementation tools. In this, their focus lies on the need of coordination, investment, legislation and innovation. The declaration can be found enclosed.

In a reaction, MEP Wim van de Camp and Commissioner Violeta Bulc emphasised their support to back the sector and its initiatives to fully exploit its potentials and better integrate it into the multimodal transport chain.

Wim van de Camp: “What we have experienced today is the strong innovative capacity of the Inland Waterway Transport and Ports sector towards 2030. I very much welcome the sector’s initiative for a declaration as it shows its future commitment towards greener and smarter logistics. I am convinced that if the European Parliament, European Commission and sector representatives join forces, we could create the stable financial and legal framework that supports this inevitable transition. Sufficient CEF funding would be the important piece in the puzzle to make this a reality.”

Commissioner for Transport, Violeta Bulc is attending the Inland waterways and ports dialogue in Strasbourg today. The event gathers stakeholders and EU decision-makers to discuss a vision for inland waterways transport towards 2030. At the occasion, Commissioner Bulc said: “European inland waterways and ports have united people and facilitated growth for centuries. Therefore, I welcome the sector’s vision towards even more sustainability and innovation. It is high time to boost the potential for a digitally connected, low-carbon, and highly skilled inland navigation and port sector. A major step was achieved with the adoption yesterday of the Directive on professional qualifications in inland waterways by the European Parliament. The Directive is now only pending the approval of the Council of the EU.” Inland waterway transport, that is, the use of rivers, canals and lakes for connecting people and trade, provide a reliable and environmentally-friendly transport option. With 140 billion tonne kilometres, the sector makes a considerable contribution to the EU’s transport system and the aim is to realise more multimodal integration. The EU seeks to make inland waterways a decarbonised, digital and innovative alternative, which provides efficient mobility throughout the EU. EU-supported projects and the sector do not only improve navigability, but also the ecological status and resilience against climate change. This can be achieved for example by promoting smart, clean and modular barges, and multimodal inland ports, as well as by deploying alternative fuels. 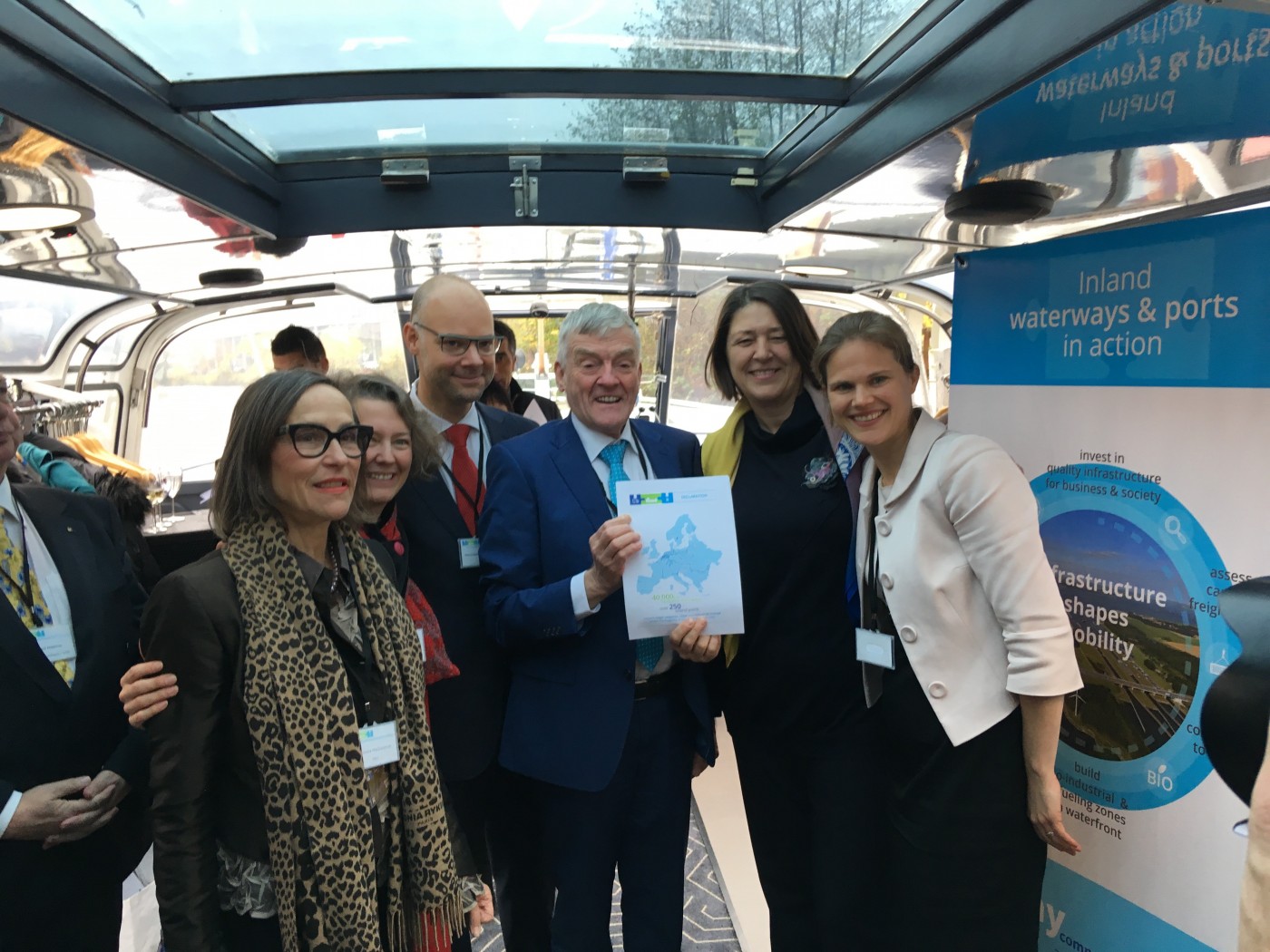 4 looks into the future

During the event in Strasbourg, four looks into the future were discussed with Members of the European Parliament and European Coordinators.

Firstly, Diederik Antvelink (NedCargo) explored the pioneering innovations in the fleet from zero-emission to connected vessels. Secondly, Jean-Louis Jérôme (Port Autonome de Strasbourg) focused on the inland ports. He talked about green urban logistics and considered inland ports as circular economy hubs along the EU waterways. Furthermore, Nadège Dewalque (De Vlaamse Waterweg) discussed how congestion-free logistics depend on well-connected quality waterway infrastructure. And finally, Theresia Hacksteiner (European Barge Union) highlighted the importance of people as major asset of the sector. Supported by the Directive on Professional Qualifications, which was officially adopted by the European Parliament the previous day, a new competence-based system of education will be introduced in IWT, attracting qualified people to the sector and offering interesting jobs and career perspectives.

Background of the event

Movie of Inland Waterways and ports in action: https://www.youtube.com/watch?v=7SkMpnpwnZg&feature=youtu.be

While the EU budget for the next financial period (2021-2028) is now being discussed, the inland waterway transport sector and ports want to stress the importance of a strong Connecting Europe Facility (CEF), which includes support for Inland Waterway Transport and ports. Furthermore, in 2018 the EU will focus on multimodality, improving the integration of all modes in the EU transport system.